Archibald Sinclair as well as being a "Gaelic" Printer (founder of the Celtic Press in Glasgow) with his business at Waterloo Street in Glasgow was the President of the Glasgow Islay Association. The Association was founded in the year 1862 its purposes being to gather and preserve the traditions, folk tales and poetry of Islay. The first meeting being held in the Garrick`s Hotel, Stockwell Street and presided by Archibald Sinclair. There would also be further meetings to help bring together natives of the island who were then resident in Glasgow and to also provide relief and assistance to the more less fortunate.

First off the mark in 1857 was the Glasgow Sutherland Association which was for many years the largest and best supported in the city. It still continues to function albeit in a more low key manner. Coming a close second was An Comunn Ileach in 1862 which was set up by a group of Glasgow Ilich following an inaugural meeting in Garrick’s Hotel in Stockwell Street. In charge of the proceedings was city printer Archibald Sinclair who was born at Mulindry and operated a highly successful printing business at 62 Argyle Street - premises which were a mecca for the city’s literary Gaels of that period. Among others at the first meeting were the Rev Robert Blair of St Columba Gaelic Church, Thomas Pattison of ‘Gaelic Bards’ fame, Donald Carmichael, later to be minister at Inveraray, and Dr William Mac-Donald, joint author with John Murdoch of the ‘Sketches of Islay’.

Archibald Sinclair became the founder president followed by Malcolm Smith. The president’s mantle then passed to the founder’s son and namesake and an esteemed Gaelic books editor who is best remembered for being responsible for the compilation of ‘An T-Oranaiche’. During the Association’s jubilee celebrations in 1912 the Sinclair Memorial Fund was established as a tribute to his memory. This provides annual Gaelic prizes for all the Islay school - a practice that continues. Following Sinclair’s death in 1899, the presidency passed on to William Campbell, followed by John MacTaggart, Duncan MacLean, Finlay MacKeachan, Alex MacArthur, Duncan Campbell and Iain Millar. Following Millar’s extended tenure as president it was decided that the office-holder would occupy the chair for a three year term only - another continuing practice. 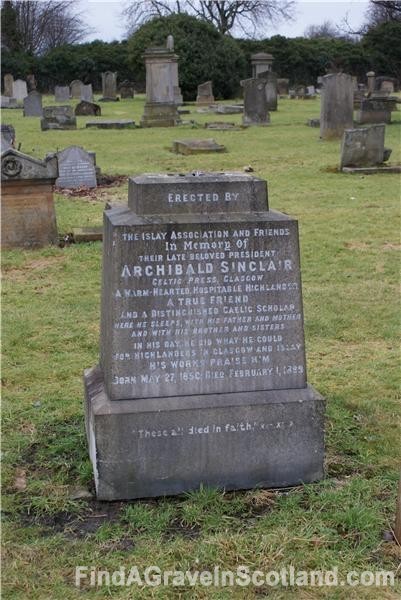