James Smart of the Glasgow Police (1804-1870). Born in Cathcart, Smart spent his early years in the City of Glasgow. As a young man he was employed for a short time in the tea trade in England but soon returned to Glasgow. In October 1831 he joined the joined the Barony of Gorbals police as a day constable and ultimately served there as Sergeant. Captain Smart had originally resided in Wallace Street, Tradeston. In 1835 he was promoted to Superintendent of Calton Burgh police and by 1846 Smart became Assistant Superintendent of the Eastern Division, having gained this promotion at a time when the working people of Glasgow were suffering severe economic difficulties.

A political demonstration in March 1848 saw crowds making their way to Bridgeton to bring out the mill workers in support of an appeal for food for the unemployed. However police preparations had been made and the crowds were met at John Street (now Tullis Street) by James Smart with a number of police and 17 special constables who were armed with muskets. The demonstrators were hemmed in as the order of "Charge" was given by Smart. This either meant "attacking" the crowd or the "loading" of muskets.

The special constables, several of whom were army pensioners, did not charge their weapons, but instead fired indiscriminately into the crowd. Four men were killed instantly and two more died later. The military continued to patrol the City yet angry crowds still lined the streets for some days. All public offices were securely guarded. This dreadful incident is remembered as the Bread Riots of 1848.

James Smart’s reward for the handling of the crisis was promotion to the rank of Chief Superintendent in December 1848. In the Police Act of 1862, he was designated as Chief Constable of Police in Glasgow and his appointment led to many practical innovations. He was responsible for the introduction of the Mounted Branch and oversaw the abolition of the police rattle in favour of a whistle and the issue of batons in place of sticks. Another noteworthy innovation was the installation of the magnetic telegraph between police stations and fire stations. James Smart died on 27 May, 1870. 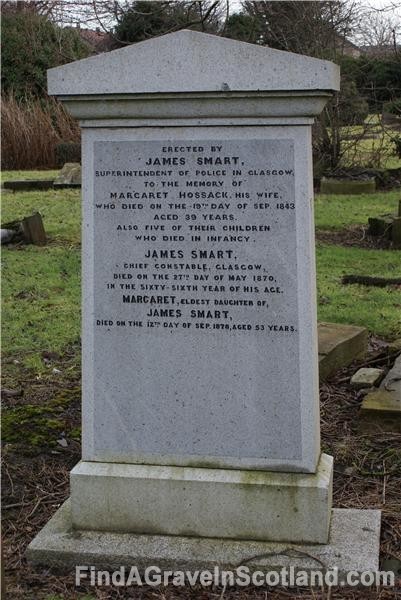