William Miller was born in Glasgow and lived in Dennistoun, a suburb to the east of the city centre. His ambitions to become a surgeon were thwarted by ill health, and instead he set up in business as a woodturner and cabinet maker. Meanwhile he began to write poetry and nursery rhymes, mainly in Scots. These appeared in a number of magazines of the day, and in 1842 a collected edition was published under the title: Whistle-binkie: Stories for the Fireside. This contained the nursery rhyme for which he is now best known, "Wee Willie Winkie".

"Wee Willie Winkie" went on to achieve considerable popular success, and was translated into many different languages,

But while it brought Miller a degree of fame at the time, it did not make his fortune and he continued to work as a cabinet maker. In 1871 Miller fell ill with an ulcerated leg, which forced him to stop working. By the time he died the following year he was destitute, and he was buried in the Miller family plot in Tollcross Cemetery. Public subscription later raised the funds to erect a memorial to him in Glasgow Necropolis.

Wee Willie Winkie runs through the town,
Up stairs and down stairs in his night-gown,
Tapping at the window, crying at the lock,
Are the children in their bed, for it's past ten o'clock?

Hey, Willie Winkie, are you coming in?
The cat is singing purring sounds to the sleeping hen,
The dog's spread out on the floor, and doesn't give a cheep,
But here's a wakeful little boy who will not fall asleep!

Anything but sleep, you rogue! glowering like the moon,
Rattling in an iron jug with an iron spoon,
Rumbling, tumbling round about, crowing like a cock,
Shrieking like I don't know what, waking sleeping folk.

Weary is the mother who has a dusty child,
A small short little child, who can't run on his own,
Who always has a battle with sleep before he'll close an eye
But a kiss from his rosy lips gives strength anew to me. 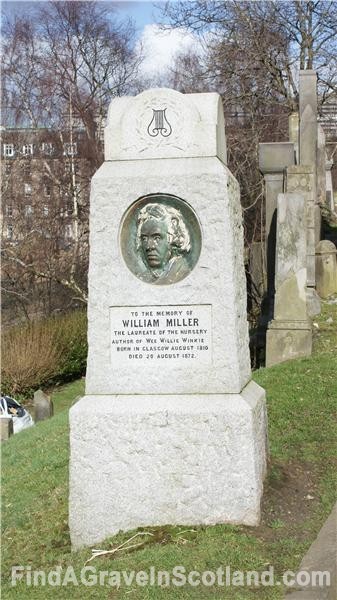