James Fillans, an eminent sculptor who lived in Paisley.

An eminent sculptor, James Fillans was born about 1808 at Wilsontown, Lanarkshire, but his parents moved to Paisley when he was very young.   In early years he showed a natural talent for drawing and modelling and aquired a knowledge of carving. He became apprentice to a stone mason serving his time in Paisley.  During his career as a mason he was engaged in carving the ornamental capitals of the columns of the Royal Exchange, Glasgow.

After serving his apprenticeship, he devoted some time to the modelling  original busts including those of William Motherwell the poet, Sheriff Campbell of Paisley, & Co. In 1836 he visited the Continent to improve himself and to study of works of art. He then settled in London and in the first exhibition of the works of living artists in the Royal Academy at Trafalgar Square, where he had  seven marble busts, among which was that of Allan Cunningham.  This advanced the fortunes of the young and promising Scotch sculptor.

Having received extensive commissions in Scotland, he moved from London to Glasgow to take on commissioned work.  Among the most prominent of his works are the Birth of Burns, in also relievo; a life-sized group, Blind Girls reading the Scriptures; life-sized group in marble, Madonna and Child; life-sized figure, Grief, or Rachel weeping for her children; the full-length statue of Sir James Shaw at Kilmarnock; the bust of Professor Wilson (Christopher North); busts of Allan Cunningham, Motherwell, and William Kennedy, Esq., author of Fitful Fancies, &c.; posthumous busts of James Hogg, Sir Walter Scott, and Robert Burns; statuette in bronze of the racehorse Flying Dutchman, the property of the earl of Eglinton; Bas Reliefs, illustrative of catching the wild horse in the Texan Prairies, &c. &c.

Besides his work as a sculptor, he was a proficient painter and received many commissions.

He died on 27th September 1852, after a short illness, of rheumatic fever. He left behind him a widow and eight young children (7 boys and 1 girl). 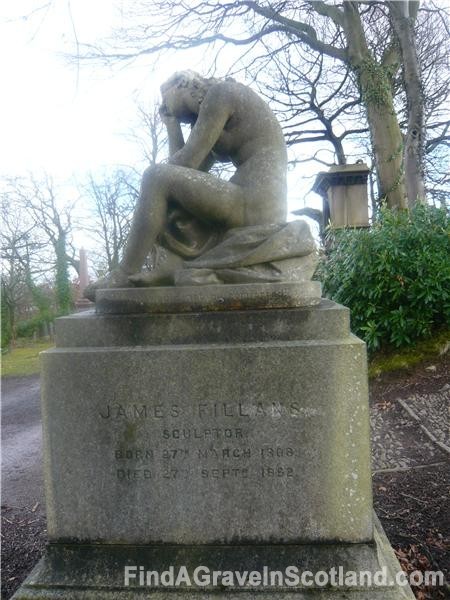